Did you Know Gender is on a Spectrum?

I certainly didn’t.  But that turned out to be one of a great many things I did not know about

Gender, sexuality, and really what life is really like if you are not born ‘straight.’

When my grand-daughter came out as ‘gender-fluid’ it really rocked me.  I was shocked but I thought, ‘it’s okay, we can adapt.’  I didn’t know what it meant.  All of the ‘ugly’ words of my youth popped into my head, but none of them really described what I came to understand as non-binary.  I thought it would be just a case of adapting, after all my elder sister had changed her name at 16 and we all just ‘adapted and changed’ what we called her.  I thought this would be the same.   How wrong was I!

Here was my lovely grand-daughter, who the year before had proudly swirled around in a beautiful gown on the way to graduation.  Who, after 18 years as a daughter Nas announced they were neither female nor male and would appreciate it if we could use the binary pronouns ‘they/them/their when referring to them in the third person.

Another learning:  the importance of pronouns.    Who knew it would be so hard to swop over from she to they?  I am not sure what part of the brain rebels but in my old head

when I say ‘they’ my brain looks for another person.  Would a completely new word make it easier? I don’t think so.  It’s the memories that get in the way.   It is an ongoing battle, but I am winning.  I keep practising.  Its like learning a new language, but the implications of not ‘getting it right’ are huge.

You see, what I did not realise is the pronouns we use ‘reflect’ the respect we have for the person we are talking to or about.   Think about seeing a baby with a pink headband around their bald head.  Why?  Because the Mum doesn’t want you to mistake her child for a boy.  Check how angry she gets (and how embarrassed you get)! We don’t want to get it wrong! Its not respectful!  But gender-neutral/fluid/non-binary people are constantly mistaken for the wrong gender – and it hurts!  When a friend or family member uses “she/her/hers” instead of “they/them/theirs” causes hurt and distress.

The non-binary is minimised when people say ‘you can’t be both’ you need to choose – ‘be one or the other’.  If only it were that simple!   Yes, it’s hard to adapt – but it’s harder for them to live when ‘we’ don’t.  And gender dysphoria is far more common than you could ever imagine.  I’m fairly sure most people that read this will know someone who is non-binary, they just haven’t decided to tell you.

Some of the thoughts that went through my mind in the beginning.

It’s a phase ‘she’ will grow out of it!  Or maybe it’s a way to get attention?  –  Well, it wasn’t, and it isn’t!  But really what difference would it make if it were? 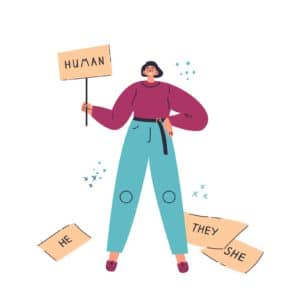 If one wants to keep a close connection with a child then,  you must keep the communication flowing and make it alright to talk, to discuss, to even be able to vent regardless of what the issue is.

I have watched my grandchild grow and adapt to their new way of being.  I see the hurt when others don’t even try to get the pronouns right.  It is confusing but language is ever-evolving so this is something we will all get used to, but only if people use ‘they/them/their’. We need to make an effort because it makes so much difference to those people who identify with them.

Language matters.  Feelings matter.  Non-binary people matter.  In fact we all matter.  I love my grandchild.  They are quirky, arty, cheeky and bloody noisy at times.  Gender does not define anyone; it’s a part of who we are – just a part.  It does not define who we are.  It should not define how you are treated.

Links to check out for more info