Have you ever made a wrong decision?  Did your world collapse?  It can be challenging to make a decision sometimes. Think about the last time that you were procrastinating over making a decision.  Is this the right choice?  Perhaps, I would be better doing that!   How much time did you waste?  Often, we get so stuck in the Should/could/would/must consider/what-if scenario, we fail to decide at all.

However, from my own experience, I know that making a wrong decision is often better than failing to make a decision at all. Poor decisions can ultimately lead to positive outcomes.

In reality, avoiding making a decision is actually a ‘decision.’  It is a decision to avoid.  Failing to make a choice of what ‘way to go’ most often guarantees a poor outcome.  It also gives others the opportunity to choose for you, which puts them in 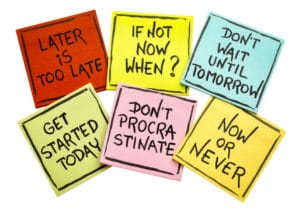 charge of your outcome.  A wrong decision at least provides change and momentum. That momentum can be adjusted and steered toward the right direction.

Nothing good happens when you fail to make a decision. Life stagnates unless you choose a course of action. For example, choosing the wrong college major is much better than never choosing a major and staying home instead.

You can handle making mistakes. You should expect to make mistakes, whenever you are learning or doing something new.  It’s not failure, it is simply feedback that way wasn’t successful and can try another way.  We all make errors of judgment or a wrong decision, but more often than not, the decision was based on the information we had at the time.  In hindsight, when there is more information available we might do it differently, but if we hadn’t taken the step, we would not have gained the extra facts needed to succeed.    The most successful people make the most mistakes.

When you feel confused about what to do, it is likely that each of your options is equally acceptable to you. If you choose quickly and starting following through, you continue to move forward

with your life.  Rest comfortably in the knowledge, every decision can be remedied by another choice.

From today, try to make decisions with confidence. Embrace the idea that a poor decision is usually better than avoiding the decision.  Move forward toward your goals seeing everything as a stepping stone to the ultimate destination you have chosen.